This post originally appeared on the Anabaptist Historians blog on March 23, 2017.

A sign at a recent rally against the Trump administration’s proposed immigration policies— including the revised Executive Order known as the “Muslim Ban”—read “Hey Smucker, 200 years ago our Mennonite family took sanctuary in PA, just like yours did.” While I’m all in favor of protest signs calling me out personally, this message was targeted at Lancaster County, Pennsylvania’s newly elected Republican congressman, Lloyd Smucker. I heard about these protesting Mennonites first in a Tweet sharing a post on Esquire magazine’s website, titled “It Takes Something Seismic to Get this Group Protesting: The Mennonites are out in the Street” and in a McClatchy article covering Mennonite responses to current politics, titled “Trump turns apolitical Mennonites into protestors.”

Representative Smucker has publicly stated his support of the administration’s ban on refugees and on immigrants from 6 predominantly Muslim countries, earning the ire of many Mennonites in Lancaster County, who have long welcomed immigrants and refugees into their communities and churches, often sponsoring these newcomers through the Mennonite Central Committee and Church World Service. These protesters knew their local history, and identified that Smucker’s ancestors were indeed part of the wave of German-speaking Anabaptists who flocked to colonial Pennsylvania in the face of religious persecution in Europe. 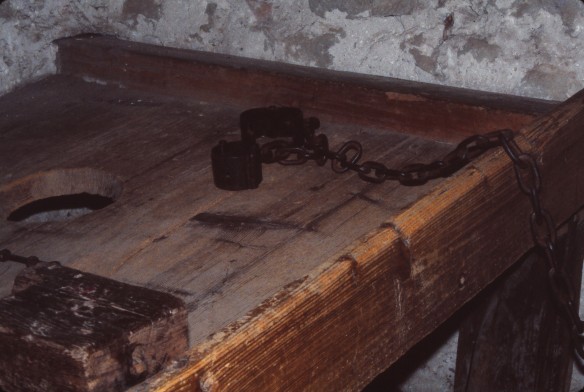 The chains where prisoners at Schloss Trachselwald were locked up. Photo by George Smucker, Smucker Heritage Tour, 1988.

A few clicks on the Swiss Anabaptist Genealogical Association’s online database confirmed that Lloyd Smucker and I share an immigration story. We are fifth cousins once removed, each descendants of Christian Schmucker—“The Immigrant,” as the Amish man is known by the Schmucker, Smucker, Smoker Family Association. Schmucker arrived in Philadelphia in 1752 on the St. Andrew, which departed from Rotterdam. My family’s account holds that Christian was deported from Switzerland circa 1745 after serving jail time at Schloss Trachselwald because he was a “Pietist teacher.” Like many Amish emigrating in the mid-eighteenth century, he and his wife Catherine Hesster and their four children arrived in Pennsylvania as religious refugees. In the new world, living in Berks County, Christian and his adult male sons repeatedly were fined for not reporting to militias to fight in the American Revolution or hire mercenaries in their stead.1 This form of resistance (or is it nonresistance?) was common among Mennonites and Amish during the Revolutionary era.2

I read about the contemporary protesting Mennonites a day after I (and fellow Anabaptist Historian blogger Ted Maust – catch his recap here) attended Pub Comm, the Philadelphia area’s annual Public History Community Forum. The theme of this year’s one day event was “‘This is Why We Fight’: Public History for the Public Good,” and featured panels, workshops, and discussions focused on how public historians can harness “public history principles and programming to address issues of social justice and advocacy within their community and beyond.” A presentation from Eastern State Penitentiary’s Sean Kelley focused on how this Philadelphia institution—notorious for imprisoning Al Capone and for its creepy Halloween tour—has rewritten its mission statement in order to examine contemporary mass incarceration, as well as the prison’s historical context. Margery Sly, an archivist from Temple University Library’s Special Collections Research Center, talked about the need to archive contemporary protest movements as they are happening. Annie Polland from the Tenement Museum shared how its public programming makes space to address issues of contemporary immigration experiences, just as it interprets the lives of early twentieth-century immigrant families who lived at 97 Orchard Street in New York’s Lower East Side. I came away from the day feeling more empowered as a historian, reevaluating my own personal mission as I interact with students and pursue my scholarly agenda.

Some historians, like Mennonites, have often tended toward a neutral outside observer status, often preferring to appear apolitical rather than confrontational. These historians have strived for objectivity, despite the subjective perspectives historians bring to our interpretation of the past. Howard Zinn famously observed, “You can’t be neutral on a moving train,” calling on historians to wear their subjectivities on their sleeves while identifying neutrality as collaboration with the status quo and existing power structures.3 Public historians have a particular utility—and by extension, power—in exerting non-neutrality since our audiences are not fellow historians in the academy, but members of the public.

In some ways, historians’ traditionally preferred neutral stance is similar to the Old Mennonite (MC) doctrine of “nonresistance,” a form of pacifism espoused by mid-twentieth century Old Mennonite leaders. Nonresistance emphasized non-political disengagement with the “world” rather than an orientation toward pursuit of social justice.4  Mid-century MCs were not in fact neutral, just as historians cannot be. But both historians and Mennonites tried to be passive “witnesses” rather than active participants. The Mennonites rallying outside my cousin Lloyd Smucker’s office and the public historians gathered at Pub Comm demonstrate that neither group is willing to be neutral any longer. Too much is at stake.

Janneken Smucker is a cultural historian specializing in digital, public, and oral history. A Professor of History at West Chester University, she integrates technology and the humanities to create engaging, high-impact experiences for her students. She also knows obscure things about quilts. Read More…